Do you Receive Duplicate Text Messages on Android? Reasons And Troubleshoots

Why Do I Receive Duplicate Text Messages On Android?

There are several reasons behind a duplicate or multiple messages on android which are as follows;

Having two different message apps installed on android is one of the primary reasons you receive duplicate text messages.

All the Android phones are usually equipped with stock messaging apps. But, there are other 3rd-party messaging apps out there as well. You can easily install them from the Play Store.

In such, the compatibility issues or conflicts between different messaging apps may also cause duplicate text messages on android.

You may also receive duplicate text messages on android if the device is at no network area or poor network location.

In that case, if a person sends you a message, it might re-deliver to you once you re-connect to the network.

Make sure to check if there is any network problem at your location. You may follow the guide here to fix the network error on your android.

How to fix “Mobile network not available” error on android
Verizon No Network Connection Error | How to Fix?
Resolving Not Registered on Network Error on Android

3. Issue with the Message app

Also, it is recommended to use the stock message app on android to avoid receiving duplicate messages on android.

A buggy android OS software update can also be a reason for the duplicate text messages on android. Most probably, a buggy software update has been the source of this issue.

How To Stop Receiving Duplicate Text Messages On Android?

So, after the reasons to receive the duplicate messages in android. It’s time to find the error and nail it down.

Here are the methods you can follow to solve the duplicate text message error on android.

Force restart of the Android system also makes sure to recreate the cached data of specific apps that can help you to solve the error.

Let the device be in idle mode for 30 seconds and try sending the messaging to see if it’s still sending duplicate messages.

3. Clear Data or Cache of the Messaging App

Sometimes a corrupt or full cache memory of the messaging app on your android phone may cause it to send duplicate messages. In such make sure to clear the cache of the default messaging app to resolve the duplicate text message error.

To clear the cache of messaging app;

All the apps including the messaging app on android stores temporary data called cache data to help users to access the apps faster. Over the period of time this temp. cache data gets full or might get corrupted due to app error or OS conflict.

In such, it is quite common for the app to show anomaly that includes malfunction of the app to make the device freeze. YOu can read more about cache partition and cache data here;

Using two messaging apps to manage text messages on android can be another primary reason for receiving the duplicate message notification on android.

To resolve the error simply delete the messaging app you don’t use frequently or at all.

All the dialer apps like Truecaller usually come with built-in messaging app that may cause conflict with the text messaging and pop-up duplicate text message notification.

Simply remove any other messaging app on the device to stop receiving duplicate text messages on android.

Also, we often end up installing group messaging apps and other apps in order to get extra features like visual voicemail and others.

In such, it is advised to uninstall these secondary messaging apps to solve the multiple text error on android. Also, don’t forget to restart your android after you have uninstalled the app.

To Uninstall an App on Android

Read Also: How To Uninstall System Apps On Android (Root/No-Root)

5. Switch to another messaging app

Users claimed that they were able to fix the issue by simply turning off RCS messaging or Advance Messaging on their android.

RcsSettings stands for Rich Communication services Setting. A pre-installed system app on Android devices with an objective to the SMS messages with a text message system more complex, in order to provide probing of the phonebook (for the detection of the service) and to transmit multimedia in the calls.

Any anomaly with RCS settings may be a reason for duplicate text messages on android.

Google rolled out RCS messing support in 2019 in an effort to give the boring simple text messages interface a rich-looking GUI.

But, the settings are not enabled by default. Here is how you disable the RCS messaging on Google messages to fix duplicate text messages on android.

Android phones and devices have a dedicated carrier service app that handles cellular handshakes between your phone and your carrier network. It’s called the Carrier Services app.

Getting or sending duplicate messages on android can also be resolved by simply updating the carrier services.

Follow the steps to update the carrier services app. 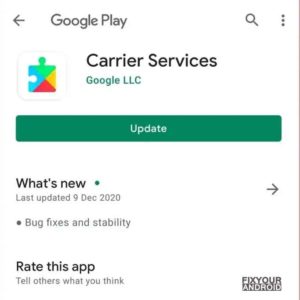 Make sure your android has the latest version of Carrier Services app.

Also, this is quite helpful to re-solve the SIM not provisioned error on Samsung android.

Follow the steps below to turn off VoLTE / 4G Calling. The device should be VoLTE Enabled and you must have a 4g Supported network.

To Disbale VoLTE on Android;

9. Update to the Latest Version of Android

If everything doesn’t seems to work, then the problem could be more serious. It could be that your phone is the culprit. Most probably, a buggy software update has been the source of this issue. Or any other buggy app is the culprit.

Typically, your android phone will receive regular software updates from time to time. The manufacturer tends to add many new features via the update.

As usual, it is a perfect practice to always keep your mobile’s software version up to date. This will not only help you to resolve multiple or duplicate text messages but also makes sure that your device is safe from any potential threat or hacking attack.

You can also try the Manual OTA update to see if it works.

If everything does not seem to work and you are still receiving multiple texts or text notifications then you might need to factory reset your device.

But before you proceed to factory reset, let me tell you, factory resetting android will erase all the saved data on your phone including media, videos, contacts, SMS, and call logs, etc.

So make sure to take a proper backup using a cloud service or local backup of your device before you attempt or factory reset.

This was the complete explanation for getting duplicate or multiple text messages on your android devices Sometimes a glitch in the network or buggy app can cause the error. However, one cannot ignore other factors like RSC settings, poor network receptions and others.