This troubleshooting works for all major smart TV including Samsung, Sony, LG, Hisense, VU, and others running on Android OS with Mira cast and Screen mirroring features.

Unable to Start Screen Mirroring Due to Hardware issues

But, sometimes your smartphone simply refuses to establish the connection with TV saying “Unable to start screen mirroring because of a hardware issue”.

Read Also: What is Samsung MirrorLink? How to Use it?

Why is Screen Mirroring Not Working on My Samsung TV?

Error while using screen mirroring from the phone to TV can be caused by several reasons including a hardware error, incompatible devices or an outdated Android version.

However, there are several other reasons that might cause the “Unable to start screen mirroring because of a hardware issue” error message which are as follows; 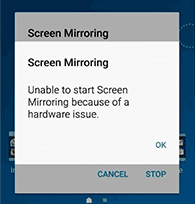 Read Also: What is a DRM Reset | How to Reset DRM?

If the screen mirroring is not working on your smartphone, then you must see if the device is compatible or not. This applies to the smart TV as well.

Some old TVs and smartphones might not be compatible with screencast directly. In such, you can use a cast device with your TV to enable the screen mirroring on the device.

Also, don’t forget to check if the phone is also compatible with the screen mirroring feature. Thus, to enjoy smooth mirroring between your Samsung TV and mobile device, first check its compatibility.

Another potential solution to screen mirroring problem is to get closer to the TV. Wifi device however, has a huge range, but not unlimited.

By getting closer to your mobile device to the TV, it will be able to connect more easily. Once you’re connected and the screen mirroring has started, you might be able to put some distance.

The Screen mirror problem might be caused by hardware error with your smartphones as well. In such try using another android phone to screen mirror with TV.

If the second mobile phone starts screen mirroring then it’s there was a problem with the previous cell phone.

A simple cold restart of your Smart TV can also resolve the screen mirroring issues easily. All you need is to turn off the smart TV and remove the power supply completely. Wait for 30 seconds and start the TV.

Wait for the TV to boot and try using screen mirroring to check if it’s getting connected.

Another easiest method to fix the “Unable to start screen mirroring because of a hardware issue” error is to force reboot your smartphone. A force restart is a bit different from a regular restart where the system forces the device to kill all the apps and services.

On some devices, you might need to press and hold the volume down button+Power button together until the device is turned off. Once the device is powered off, simply release the buttons and wait for the device to turn on automatically.

Steps to clear the cache of the app

Go back and open the app to verify if the error is gone. You may clear the cache partition on your device if the problem persists.

Changing the aspect ratio on android from 2.25:1 to some other resolution like 4:3 or 16:9 can also resolve the screen mirroring error.

Safe mode on android boots the device with minimum apps and services. You can use safe mode to resolve the screen mirroring error on your android by booting the android phone in safe mode.

Follow the steps below to boot android smartphone in safe mode.

Now start screen mirroring by connecting the TV to phone using the method explained above.

The conflict with the Android version on Smart TV or Smartphone can also be a reason for the screen mirroring error. To resolve the error you can simply update the firmware on both devices to the latest version.

The firmware update depends on the availability of the last OS firmware on the server. Still, you can install OTA update manually to fix the error.

If all the methods above don’t seem to work and you are still getting the same “Unable to start screen mirroring because of a hardware issue” error message, then it is suggested use other third-party mirror apps like LetsView or AirServer Connect.

Here is the list of 13 Best Screen Mirroring Apps For Android you can use to mirror your smartphone screen to Smart TV.

Factory resetting will erase all the data on the device. So, it is recommended to take a local or cloud backup of your data stored on the device.

Screen mirroring not working hardware problem might occur in this case. You can follow the instructions in the method to activate this option and fix hardware issue when trying to set up screen mirroring in the rooted phone.

AirPlay Not Working on Samsung TV

Use Wi-Fi Direct on Samsung Android phone and TV