VoLTE or Voice over Internet protocol is the new technology to provide a clear sound and HD video call facility to users. The majority of the carrier providers are now awaited to new VoLTE technology.

In short, VoLTE is the technology that uses your Internet Protocol to initiate voice and video calls. It also ensures the quality and speed of data sent from host to receiver and vice versa.

People have reported they have suddenly noticed a VoLTE icon on the notification bar of the Samsung android phone. Well, before you go panic let me tell you, it’s completely normal for the VoLTE icon to appear on your Samsung phone.

The VoLTE icon on Samsung signifies that the cell phone is using the 4G or LTE network and all the calls initiated on the phone will use the LTE network.  Since the VoLTE itself means the Voice Over LTE.

This is a device and network-dependent feature that required a 4g network and 4g supported phone as well.

Here is the list of VoLTE supported Samsung devices.

Follow the steps below to activate the VoLTE services on Samsung devices. The device should be VoLTE Enabled and you must have a 4g Supported network.

To Enable VoLTE on Android;

IF your device is 4G supported and you have an LTE enabled network, then it’s normal to have a VoLTE icon on the status bar. This symbol indicates that the phone is using an LTE network to place calls.

Removing the VoLTE icon is not possible from Samsung or any other phone device with or without root access.

To understand the origin, development, uses, and limits of VoLTE, you need to know the history of the evolution of mobile networks over the periods. 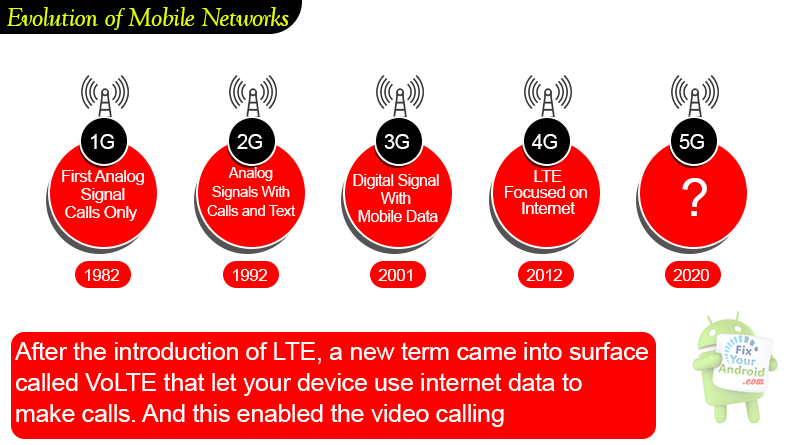 There are several types of networks you might have heard of ranging from Edge, GPRS, LTE etc. But, here we shall learn a bit about LTE and VoLTE Only.

We have come to a big change from the first generation of the mobile network to 4th and proceeding to 6th generation. Every mobile network has its own limitation and was improved over the period.

Currently, most of the mobile devices are using LTE aka 4th generation of mobile network where you can experience high-speed internet, voice-over LTE(Long Term Evolution), AKA VoLTE and making video calls.

What Are the Benefits Of VoLTE?

As the term VoLTE suggests itself, one of the primary benefits of using VoLTE is that it enables you to make and receive video calls. This allows the users to make a video call using a cellular network to another VoLTE enabled phone or device. Even though the voice quality may not be as good as offered by VoIP apps like Google Duo, Skype, Imo, etc.

With VoLTE network settings. The voice nodes are sent and received using the internet protocol instead of standard radio waves. This makes the calls crystal clear as compared to other networks.

The VoLTE network on device not only enhances the audio quality but also allows you to use the internet at high speed using mobile data as compared to other network modes like LTE, GPRS and EDGE.

Unlike older technology, VoLTE does not switch 4G to 3G when making calls; it means your device will not constantly search for the network and eventually save battery.

Should You keep VoLTE on or off?

Enabling VoLTE allows you to make high-quality calls, make video calls, use internet at high speed while on call. So, there is no loss to keeping VoLTE on, on your smartphone. It is suggested to keep the VoLTE mode always on, on your Android phone if available.

How do I turn off VoLTE?

After knowing all the pros and cons of VoLTE on the device. It;t time to ask the core question. How do I turn off VoLTE?

The process to disable the VoLTE is quite simple and can be completed in few steps on android and ios device as well.

The process to disable VoLTE on iOS device is quite similar but the option to reach the settings is a bit different. Here is how you to it on iOS;

The settings to disable VoLTE may vary from android to android based on the version and manufacture of the phone. Also, you may not find the options of the device is not have VoLTE feature.

How to Check if Your Phone Has VoLTE?

In order to use VoLTE network on the phone it is essential that it has the necessary hardware installed on the device. You can easily verify from the network settings if the VoLTE is available on your device.

Go to Settings > Connections > Mobile networks. Now check if there is an option called VoLTE calls; if yes, then your phone has VoLTE; if not, then it doesn’t.

VoLTE or Voice Over LTE connection is a mobile network technology that enables your Samsung deceives to place voice/video calls using internet protocol. It provides a better quality of voice calls even on poor networks. The VoLTE icon on the notification bar of your phone is the indication of VoLTE services. Don’t forget to check our ABOUT section for other information guides for Android.