Have you ever noticed the term “IoT Hidden Menu” on Android? Here we have a detailed guide about IoT hidden menu on android. What is it and how to access it on your Android smartphone. Also, we shall explore the uses of IoT hidden menu on your phone.

Android phones come with lots of features and functions. Some of the features on Android are hardware-based while others are software-based. But, today we gonna discuss a new IoT hidden menu on Android which is both software and hardware-based menu.

What is IoT Hidden Menu Setting?

The IoT hidden menu on Android phones is a software-oriented menu on Andriod that helps you to diagnose the associated hardware and the functional error of the hardware like camera, wifi, Bluetooth, radio services, touch screen sensors,  Proximity Sensor, Accelerometer and many more.

This IoT hidden menu is not accessible to the user in the apps section or the settings.

The only method to access the menu is to key-in the combination of special secret codes called MMI codes on the dialer.

Well, there are seamless features and functions you will find on this hidden IoT menu on Android.

IoT Hidden Menu is just like easer eggs, you don’t find it easily. To access this menu, you need to have some special codes just like dialing the *06# shows you the IMEI number of your phones.

To access the IoT menu on Android Samsung, you need to open the dialer app type *#0*# and press dial. And for other Android brands, you can use *#*#4636#*#*  to access the hidden IoT menu. 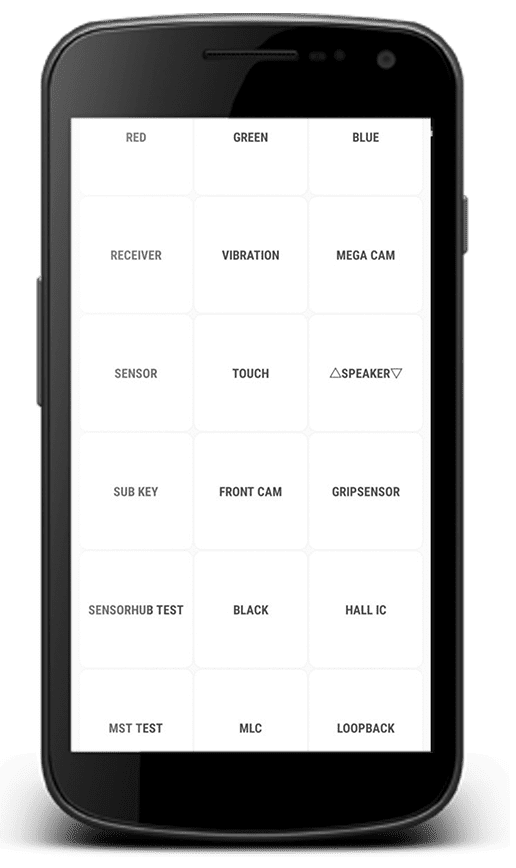 The IoT hidden menu is also known as the service menu is used to diagnose the hardware and component on the android phone to check the function of the different components on the device.

Here is the list of a few sensors and components you can test and diagnose for the error using a IoT menu.

To check the functionality of the Accelerometer on your Android from IoT menu, just tap on the “Image Test” or “Graph” button to measure how perfectly the sensors detect the motion and movement of the phone.

The proximity sensor on your android phone is responsible to test if the screen on your phone gets off while you hold it near your ear to answer the calls.

You can simply test the proximity sensor by covering the sensor near your format camera to check if the screen goes off or not.

The barometer is used to measure the different features on your android device.

It is accountable for the measurement of altitude to make the GPS tracing more prominent and accurate.

A malfunctioning Barometer may refect the wrong data.

To test the barometer using the IoT menu all you need is to tap on the “Barometer Selftest” to start the automated test.

A simple “PASS” screen will confirm the normal functionality of Barometer.

IoT menu can also help you to test the light sensors on your android phone. A light sensor is typically sensitive to the intensity of light the device is exposed to.

The adaptive light controls the light luminosity and brightness of the screen.

To test the light sensors on the IoT menu, tap on the “Light Sensor” to initiate the test, then expose your phone to the light of varying brightness.

Three levels should register in turn, starting from “Level 1” for dim lighting all the way up to “Level 3” for extremely bright.

As the name suggests itself the Iris camera is responsible to help you to unlock the phone using a facial recognization system. A malfunction on the iris camera can keep you from using the face unlock feature on your android phone.

On the IoT menu, tap on the “Iris Camera Test” to check if it’s working perfectly.

Tapping on the button pulls up your iris camera for you to align your eyes with, and will instantly close and go back to the main diagnostic page once it’s successfully scanned your iris.

Simply tap on the “LED” button on IoT menu and change the colors of the notification LED by touching the respecting color strips on the screen.

Tap on 100 Hz, 200 Hz, and 300 Hz and place your ear against the phone’s earpiece each time you select a frequency to check for low buzzing noise.

This is a new future sensor introduced to Samsung phones. IF your Android is having a grip-sensor installed. You can simply test the sensor from IoT menu.

To test for this functionality, tap on the “Gripsensor” button, then follow the prompts and release your grip when instructed.

You should get a blue screen labeled “Working” if the grip sensor is functioning properly. Once you’re done with the test, tap on the back button twice to go back to the main screen.

Other Features of IoT Hidden Menu

Besides the above-mentioned feature, there are lots of other features you can test using the IoT menu on your Android phone.

Other Secret Code to Access Hidden Menu Settings on Android

Once you are done with the required test, you can simply tap the back button twice to go back to the dialer. You are ok to operate the device normally. Hope you have learned a new function of your Android device. Also, don’t forget to explore the additional futures.

IoT menu or the Service menu on Android has been from the start of the android phone era. There are no stand-alone IoT menu apk or app but in order to access the menu, you need a special combination of shortcodes to dial. The menu is used to test the different features and functions on the phones that include, Accelerometer, Proximity Sensor, Barometer, Light Sensor, Iris Camera Test, LED & Low Frequency, Gripsensor etc. Don’t forget to check our ABOUT section for other information guides for Android