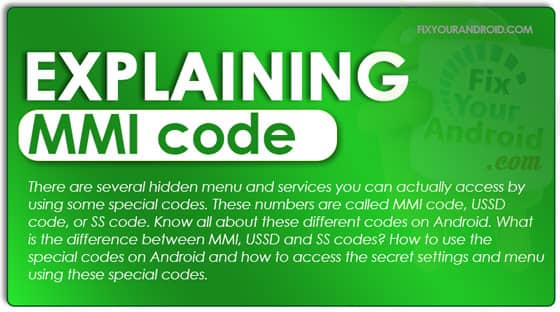 What is MMI code?

Every code that you enter over your phone’s keypad that contains an asterisk (*) or hash (#) character is an MMI code.

An MMI code or Man-Machine-Interface is used to access some specific menu on the Android device. Some MMI codes are free from network providers and are embedded within the device algorithm or BIOS itself.

While others are network-dependent. This means, your android needs to be connected to the cellular network in order to use these MMI codes. Learn about different kinds of MMI codes.

What is IoT Hidden Menu on Android? Know all About it.

In order to use the Manufacturer defined MMI code to access the hidden menu all you need is to dial the code and the android mobiles will open that menu for you.

Manufacturer defined MMI code doesn’t require pressing the dial button after dialing the code. *#*#4636#*#* is an example of MMI code to access the service menu on an android phone.

USSD stands for Unstructured Supplementary Service Data that is used by network carrier providers to allow users to access some specific services or value-added services available to users.

Balance inquiry, Value-added services, caller back tunes, the recent called number can be accessed using these USSD codes. You can also use the SIM ToolKit app to access these services.

USSD codes are network intensive and your Android is required to have network access to use USSD codes. USSD messages create a real-time connection during a USSD session. The connection remains open, allowing a two-way exchange of a sequence of data.

MMI code or Man-Machine-Interface is used to access some specific menu on the Android device. Some MMI codes are free from network providers and are embedded within the device algorithm or BIOS itself. There are different types of MMI code, Unstructured Supplementary Service Data (USSD) codes, Supplementary Service (SS) codes, Manufacturer defined MMI codes and SIM control codes which have different uses and significances. Read here to fix the MMI code error on Android.