Hidden Keylogger, you might be familiar with the term keylogger. If then let me tell you a keylogger can record all the word strokes you type on your android keyword and store them to their database or send them to a distant location. So, What is a Keylogger on Android? How to know if there is a keylogger installed on your android device. and Finally, who to remove hidden Keylogger from android? Let’s find the answers. 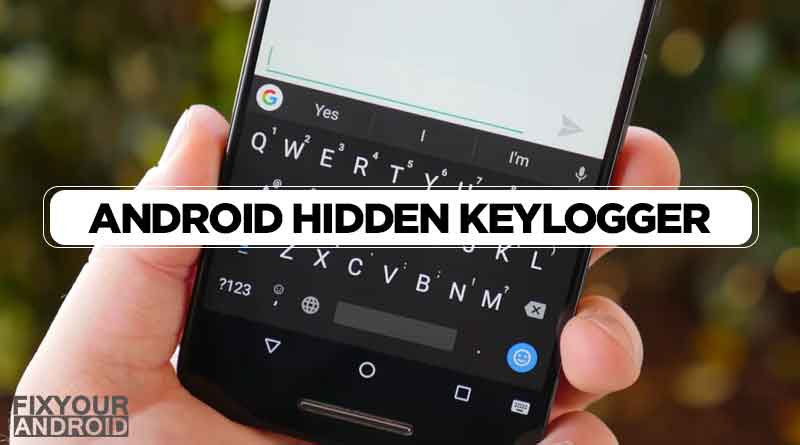 So, How to know if your Android phone is infected by the keylogger and how to find the hidden keylogger installed on the device.

Learn how hackers use a keylogger app to sneak into your phone to access your phone. But, before we begin let’s start with a short introduction to Android keylogger.

How to Fix a Hacked Android Phone? Diagnose and Troubleshoot

What is Keylogger on Android?

A keylogger is a tool to record all the buttons, alphabets or any other input entered by the user on their Android phone using the touch features.

A typical keylogger can record the mobile screen, take screenshots, save the password, or other input provided by the user on different apps using the keyword app on the Android phone.

Most keyloggers are hidden from the users and stay undetected on the device. This hidden keylogger keeps recording every stroke of your keyboard while typing and sends the information to a distant location where the actual server is located often considered as sypware.

The basic principle of a hidden keylogger is to record keystrokes on Android. The keystrokes can either be the messages you type, your user ID and passwords, your financial information, and any other.

How does Keylogger Works?

Keylogger on Android is a piece of software with all access permissions on your Android device that keeps a record of all activity(key pressed) of a keyboard.

The person who has installed the keylogger on your device can access all these keystrokes entered on your keyboard remotely and use it appropriately without any consent.

Surprisingly, most Android users are not aware of hidden keyloggers installed on their devices. Where you cannot find any separate app with the name.

There are several ways your ANdroid may get infected with the keylogger. As the app or bug stays hidden from the user or Android system, let’s say it hidden keylogger.

The main source of hidden keylogger is the fancy keyword apps you use on your Android. Dramatically, these hidden keylogger bugs are found in the most popular keyboard apps available on the Play store itself.

However, Google often releases the list of such apps that have hidden keyloggers complied with the code, but sadly Google is not smart enough to detect the bug while the app is being published by the developer or you may call by a bugger.

Recently the most popular keyboard app for Android ‘SwiftKey’ accused of having a keylogger trojan. Sadly, the apps already had millions of downloads before the news outbreak.

So, finally, the main source of a hidden keylogger trojan is the buggy keyword you use on your Android. So, if you are the one who loves to flaunt the fancy keyboard styling and cute-looking fonts on the keyboard. Think twice!!

You might end up installing a hidden keylogger on your Android and sharing all your keystrokes with some strangers.

How to Find Hidden Keyloggers on Android

However, it is hard to identify a keylogger installed on your Android phone it is not bloatware or a system app that is visible inside the app manager of your phone. But still, here are some of the best methods to find a hidden keylogger install on an Android device.

In order to find a hidden keylogger installed on your Android, you are required to observed any unusual activity or anomaly with a normal operation on your phone. Automatic rebooting, flashing some random number on the screen, and other anomalies may be a signal of a hidden keylogger on the device.

A keylogger tends to create a database locally or remotely to store the keystrokes on the keyboard. The process to record the keystrokes of the key pressed by the user on the Android keyboard and saving it to the database may take a while.

If you notice a slight delay between pressing the key on the keyboard and the appearance of the respective character on the screen. Then this might be a signal of a hidden keylogger installed on your Android.

A hidden Keylogger on Android uses the internet to store data on a remote database or send the saved keystrokes remotely. If you see unusual or high data usage and there is no internet data uses log stored in the settings, then this might be a signal of an installed keylogger on your device.

How to Avoid Keylogger on Android: Safety tips

enabling Google play to protect can help you to identify and save your device from keylogger infestation.

This was a detailed guide to hidden keylogger on android. The keylogger is accountable to record all the keys pressed on an Android device and send the recorded data to some remote database. Later the owner of the data can use the data to harm your privacy, access your social media accounts and bank accounts. The risk depends on the usages pattern of the word you have typed on your android.

The best method to save your android device from a keylogger is to use the default keyboard app and avoid any other stylish one. Also, avoiding downloading and installing an app from an untrusted source can save your device from getting a keylogger.