All you need is an Android Emulator for your PC. You can use these Android emulators to run an Android App on different mobiles environments including Samsung, Mi, Realme and any other Android mobiles.

Best Free Android Emulators for Your PC And Mac: 2022 Edition

These Free Android Emulators are full-featured and don’t need a full version of Emulator to run the Android app on PC. You can also play PUBG mobile on PC using these emulators. But, these Emulators may display some ads which are legit and negotiable. So, without wasting time let’s shoot to the list of top Free Android Emulators for Windows and Mac.

Android Studio’s emulator is the default Android console which comes with a bunch of additional tools. The tools are quite useful for the developer to test the Android app and games.

As the name suggests it’s an Emulator to run Android apps on PC as well. This tool is available for Windows 7/8/10.

However, Android Studio’s emulator is not for end-user as most of the tools are useful for developers to test the Android app. You can still try this free Android emulator to run the Android app on your Windows PC

Bliss is quite useful and popular among the android developer community. If you are planning to play Android games on Android, it is suggested to look at other Emulators on the list. The advanced features and accessibility tools are developed for advanced users.

The complicated installation of Bliss Android Emulator requires advanced knowledge of computer ads the installation is a bit complicated. Bliss Emulator will convert your PC into a complete Android PC and compatible with the latest Oreo OS.

This is a bit of a diamond in the rough, but again, we only recommend this one to the tech-savvy. You can also find more info about this on its XDA-Developers thread here.

Bliss Emulator is a complete open-source Android OS ROM that will convert your PC into an Android PC.

If you are an expert with OS installation and OS setup you can give it a try. Still, we recommend taking a complete backup of your OS and files before you proceed to installation.

Bluestacks is the most popular mainstream of all Android Emulators. Simple and easy installation, a Major OS support platform, and a varied range of features make the BlueStacks demanding and popular.

Bluestacks is one of the first emulators to get regular updates of the latest released Android OS.

This is an optimum Emulator for playing Android games on PC. The vast toolsets and user-friendly UI is quite useful to run Android Apps on Windows and Mac. In addition, this is way more useful for Android developers. You are unable to run Bluestacks on Windows PC. You can try these 9 Bluestacks Alternatives for Windows.

A vast collection of Android mobile from different makes and versions can help a developer to run and test the app on different mobile interfaces before the actual launch of the App.

Bluestacks has a paid and free version as well. If you are a basic developer or want to play Android games like PUBG on your PC. The free version is enough for you. However, the paid version of the emulator is available for a minimum cost of $2 per month.

However, a free version may force you to install some app and serve ads which is worth saving your $2 per month.

You can use Bluestacks to play all the popular Android games on your PC including Call Of Duty Mobile and PUBG mobile.

How to Resolve the Bluestacks Download Pending Error
How Safe is Bluestacks: Honest Review
How to Uninstall Bluestacks on Windows and Mac?

Official Page to Download Bluestack Emulator for Windows and Mac.

This is a pure Android Gamer Emulator for Windows and Mac. GameLoop is useful for the users who want to play Android games like Call of Duty or PUBG Mobile on PC. GameLoop was known as Tencent Game Buddy previously.

However, this Emulator is also claimed to support more than 1.4 million Android app as well. This is a complete dedicated Emulator for the gamer and not suitable for developers. Smooth installation and easy to use UI makes it one of the best Android Emulator for playing Android games on PC.

This is actually a fairly decent gaming emulator and it boasts a good collection of newer titles. Plus, the keyboard controls and performance is good.

Official Page to Download GameLoop For Windows an MAC

Prime OS is more than an Android Emulator. In fact, this is a different type of emulator that supports gaming and development as well.

This Emulator can be installed as a separate OS on your Computer’s HDD partition.

It can boot as a separate OS that is compatible with mouse and keyword. In short Prime OS  actually runs as a ChromeOS without all Chrome parts and features.

A gaming center to help you to play almost all android games and mouse and keyword support give you the freedom to multitask.

You can watch the video and open multiple apps with various ranges of supported Android apps and games. But, this can also be productive to be used from the developer’s point of view.

Another free Android emulator for Windows and Mac. Free yet powerful Emulator is equally useful for Android gamers and developers as well.

On the gamers’ end, it has huge support for a range of Android games, with a vast range of 1 million supported apps.

MEmu App Player aims to provide you with the best experience to play Android games and use apps on Windows.

Key components of MEmu Android Emulator have been updated in MEmu 7.0 and the general performance has been improved by 30%, which translated in much higher frame rates, better quality graphics, and overall improved experience.

Additionally, it supports Android Jelly Bean, Kit Kat, and Lollipop. You can even run multiple instances at once for multiple games or testing features

Nox player Android Emulator works fine for Gamers and App developers as well. The emulator is suitable for Android developers and hardcore gamers in the same manner. You can use this tool to test the android app on all the latest mobile devices and models.

In addition, the emulator can run the major games including PUBG mobile, Call of Duty mobile and Justice League smoothly.

Nox Player is compatible with the keyboard and mouse as well. This means you can also connect your Mouse and Keyboard to the emulator to get touch screen and keypad features. Gamepad support makes it easy for gamers to control the games with various ranges of input instruction.

Overall, Nox Player is the best free emulator to play Android games on PC and MAC. And from a developer’s point of view, this Nox Player makes it on the top of the list.

Talking about RAM and CPU supports, the emulator allows you to control the amount of RAM and CPU you want to assign to the Nox Player. For better gaming results you can configure the maximum CPU and RAM.

As a developer, if you are curious about rooted Android mobiles, this Android Emulator can let you experience the rooted mobiles from a huge range of makes and models of Android mobiles.

The only con of this Free Android Emulator is the lag while operating multiple apps or games at once. However, you can always use Nox Player to run a hardcore Game or app.

However, this emulator is capable of running almost all the android app available on the play store. But, it has missing features like mobile simulator and app tester.

ARChon is actually an initiative by Google to support the native android app. Later a GitHub developer decides to develop it and add additional support to the emulator. He finally released ARChon to run all the Android apps on the Chrome browser.

However, ARChon Android Emulator is not suitable for hardcore gamers but still, you can play light graphics Android Games on PC.

You need some advanced level of skill to set up this Android Emulator in Chrome as it requires installing a couple of additional apps and extensions on Chrome. But, don’t worry all the add-ons are safe and not going to harm your browsing experience.

You may experience slow processing apps if you are running a computer with a low capacity of RAM and CPU.

Developed by NetEase, MuMU is one of the decent emulators with quite similar features to most popular android emulators. Like other emulators, MuMu also runs on Android 7.0 and has a decent boot time with minimal lags and crashes.

MuMu comes with some extras future that warrants its consideration in the list. The emulator also has a beta version for low-end computers with lower configurations.

While testing the emulator, we find it quite fast with apps and games that makes it one of the best emulators for Windows and Mac PC.

What is Android Emulator?

An Android Emulator is a Windows and Mac software ad-on software that lets the user run any Android app on PC.

These Android emulators are quite popular among Android app developers where they emulate the app to see how the application will look on the different mobile interfaces. Even the famous game PUBG is a very good example of running an Android game on PC.

What is the Use of Android Emulator?

The blockbuster Android game PUBG is a great example of the optimum use of the Android Emulator Engine. The best Android emulators for gaming include Bluestacks, MeMu, KoPlayer, and Nox. 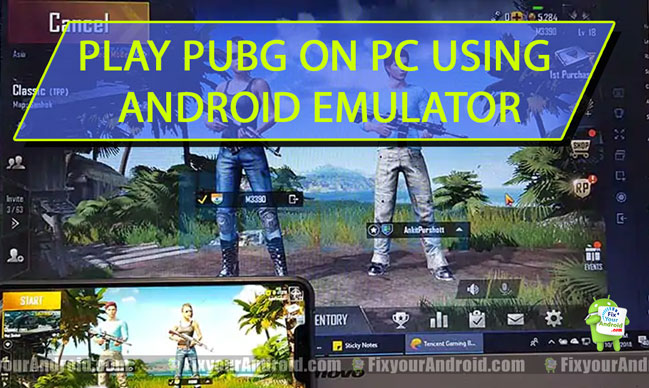 Android Emulator is way more useful emulator for Android App developers. These Emulators allow the app developers to simulate the actual mobile interface to test the Android app before the launch. Usually, the Android Studio emulator is fine for this kind of work. However, Xamarin and Genymotion are excellent for this type of use as well.

Android app and game developers like to test apps and games on as many devices a possible before launch. Download the Emulator on your PC and test your Android app on different mobile device environments right on your PC. This was the list of best Android Emulators you can use to test your Android App or play Android Games on PC and PC.

WHAT TO READ NEXT: