Video editing is one of the digital skills you can develop in the modern era. This not only allows you to explore the creative side of an individual but also can fetch you revenue someday.

With the whooping rise in the video editing industry, there are plenty of free and paid software and apps that facilitates you to edit and publish video across all social media platforms.

But, the question “Video Editing on Smartphones vs. Computers” is still untapped and here we are to discuss in brief the video editing experience on a PC and smartphone.

Which one is more professional, easy and at the end we have listed some free and paid video editing tools for you to check out. 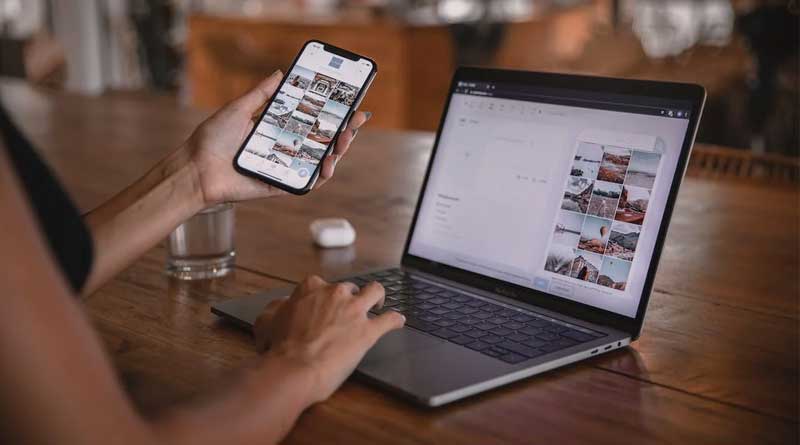 Video Editing on Smartphones vs. Computers

Video editing, the term triggers your mind to think about a person sitting on a chair and editing a video on a high-performance PC.

But, nowadays there are several apps and online video editing tools to edit and create a professional video with few simple mouse clicks or taps on your smartphone without the advanced knowledge of render, layers, effects, and transitions.

There are several free and paid video editing tools you can use on your computer or Mac to create and edit videos. High-end video software gives you a huge range of tools to produce a quality video. Besides here are some pros and cons of video editing on a computer. 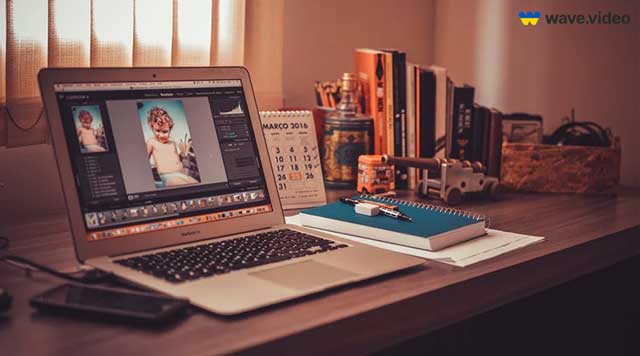 Pros of Video Editing on Computer

one of the most significant advantages of editing video on a computer screen is it gives you the liberty to use a bigger screen to see the results and production process of the video.

A bigger screen lets you see the buttons and effects precisely and is also good for small detailing where you need to see closely on the video effects especially while using VFX and SFXs.

Video editor software on a computer gives you a massive group of tools and options to cut, crop, edit, merge, and add effects or customizations on the dashboard.

This might be difficult for beginners but once you have mastered it, there is a huge dimension of video effects and editing you can explore.

All the significant animations and VFX effects on the video requires a high-end processor that gives an edge to the editing experience on a PC.

Along with better editing options, a computer provides you with higher video production and rendering as compared to smartphones. Video editing software on a computer usually allows you to export video with better quality in terms of higher resolution, frame rate, and bitrate.

Another advantage of video editing on a computer is it can turn your imagination into reality. A video editor on the computer(even the free one) has a huge collection of tools, effects and transitions with lots of customization options that can be used to create custom videos as per the requirements.

Also, you will be able to judge sound balance and tone better. Headphones are not the answer, speakers are better and they tend to be more realistic and bigger on PC.

There are thousands of free and freemium video editing software for PC. These softwares have their advantage when it comes to video editing for different purposes.

For example, Adobe premium is good for video editing while adobe after effects is dood for making motion videos and visual effects.

Cons of Video Editing on Computer

Most of the video editing software on PC needs a high-end processor, RAM and other resources and that might be expensive if you are on a limited budget.

For smooth editing and fast rendering, video editing software is required to have a minimum specification of the PC regarding the processor, RAM and OS version as well.

In such, it is not possible to use a high-end video editing tool on an older PC.

Not only is video editing software more expensive, but the whole ordeal of editing on your computer will cost you more.

For starters, your electricity bill will be higher. And you might also need to upgrade your graphics card.

Sharing a produced video on PC software to social media channels is not straightforward. You cannot directly share the video from your PC to all social media accounts.

When you complete an edit on a mobile app, you typically have the option to share it on social media right away.

At the time of writing, you can’t upload Instagram Reels from your computer, and in spite of the fact that you can upload videos to Facebook, Twitter, and TikTok, the process isn’t as streamlined as on mobile phones.

This may sound weird and might be subjective to the users. But, in most cases, video editing on PC or laptop is a tide work as compared to smartphones.

As most of the video editing tools on PC lack pre-assigned templates and effects. You might need to navigate to several menus to add simple text or effects to your video.

If a video of 5 minutes takes 1 hour on a PC then it would take around 15 minutes on your phone.

This is the era of mobile technology and thus you cannot ignore the potential of your mobile device when it comes to video editing using smartphones. It not only helps you to edit the video on the go but it is more convenient and easy to use as compared to a PC. 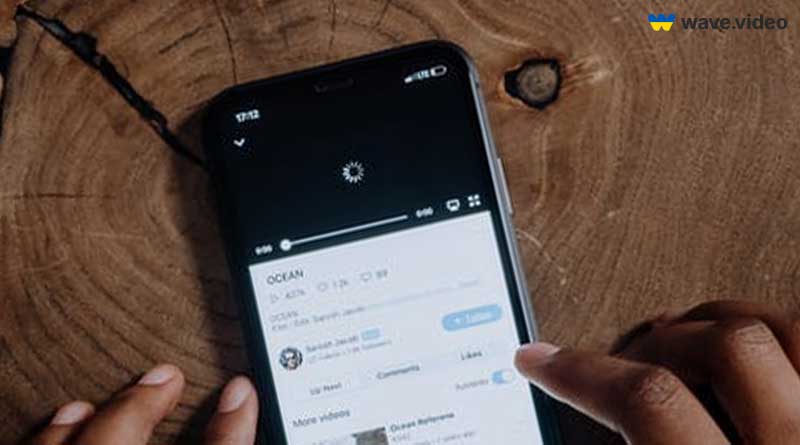 Mobile phones have improved significantly since they first appeared on the market, and so has the software to edit videos. These two leaps in technology have made it possible to record and produce videos solely on your smartphone.

Here are some pros and cons of video editing on Smartphones.

Pros of Video Editing on Smartphones

Since mobile video editing apps tend to be less complex, it might be the ideal way to learn how to edit. Plus, most of us use our phones more than our computers, so you’ll probably be more comfortable doing it on your smartphone at first.

There is a huge range of video editing apps available for smartphones including Android and iPhones. These apps can be used to achieve almost all the major video editing options.

For instance, VITA is good for adding templated to the video while KineMaster is the optimum tool for editing audio, adding a green screen and other effects.

As compared to video editing on PC, smartphones allow you to edit, produce and publish video on social media faster. The ease of use and faster rendering make it possible for users to use smartphones for basic video editing faster.

Cons of Video Editing on Smartphones

Most video editing tools for smartphones are limited to tools and functions when it comes to creating professional videos. Unlike video editing software on PC where you can edit the video more effectively and use lots of editing options, video editing on smartphones has it’s own limitations.

Editing and producing videos on smartphones uses lots of resources. This means this might drain the battery faster. Users have also reported a significant rise in the temperature of the device.

However, it is possible to use video editing apps on any smartphone including android and iPhone. But, you need to have a powerful processor and RAM to produce a large and high-definition video.

Video editing on low-end smartphones causes the device or hang and might not produce the desired results. Most of the powerful and high-end video editing apps on smartphones, tend to hang and freeze to restart the device randomly while rendering the graphics-rich video.

The AI video editing tool is one of the easiest ways to edit and produce your video with a piece of basic knowledge.

All you need is to shoot and upload the video directly to the tool and choose from the hundred and thousand pre-defined designs, templates, effects and layers to apply to your video.

As a result, the demand for a quality online video editor extends to most industries around the world. A video editor’s job is to combine video clips and footage with eye-catching graphics and cool sound effects. In such Wave.video is a free video editor and one of the best video marketing platforms you can use. Canva, VEED, Clipchamp, and Kapwing are the name of some other online tools for video editing.

The cherry on top, these tools work simultaneously on the smartphone and computer without a limit of low-end processor or RAM on your device.

How to Transfer Videos From Android to PC :Wired and Wireless

PC vs. Smartphone: Which Device to Choose for Video Editing

Video editing on smartphones and a PC has it’s own advantages and limitations. If you are a beginner and running low on budget then video editing on a smartphone might be a great choice for you.

This will not only save you time allowing you to produce video with a basic level of editing. But, it will also help you to understand the basics of video editing before you spend on a high-end PC and video editing software for PC.

But, once you have excelled in the skill, it is recommended to switch to PC for video editing as it will let you explore the huge possibility of video editing tools, advantages, and effects to produce a professional video.

Editing videos — especially if you’re working with large projects and using professional-grade programs — will push your laptop’s limits. Make sure you have a fast processor and a lot of RAM, as well as a huge hard drive.

Should your laptop not meet the specifications above, you might want to reconsider using it as a video editing tool. Working with a bare-bones laptop will suck the enjoyment out of video editing. You’ll get stuck waiting for everything to load, render, and save all the time.

We all use our mobile phones to take videos, whether it’s to post engaging social media content or to commemorate important events like surprise wedding proposals and birthday cake blowouts.

As an average smartphone user that’s also on social media, you probably already shoot and share videos from your device. You might even have experience using your smartphone’s native video editing options.

Popular apps like TikTok and Instagram make the idea of enhancing videos — through adding filters or music — more approachable, too.

If you’re simply looking to expand a little lit beyond beginner video shooting and editing, you can start by exploring the options already available on your phone. You’d be surprised by how many video-editing mobile apps are out there.

Video editing on PC is not limited to some pre-defined effects and transitions. It also allows you to turn your imagination into reality. Also, most of the high-end video effects are produced using PC. But, in the modern era it is also possible to produce video using smartphone.

Proper video editing, even on a novice level, can be done only on PC. You need a bigger display than 5″ to comfortably see whether the simplest thing like camera level or focus point is good.

You’ll need more precise controls than finger covering at any time at least 3–4 letters on an on-screen keyboard.

You’ll need proper computing power to apply masks, LUTs, and effects that will at least try to maintain similar quality to the original footage. You’ll just need a comfortable workplace.

It depends on use your use if your work is to make normal projects, newly started YouTube channels, or Instagram reels then mobile is the best option when you feel to go advance you can use PC for video editing.