Youtube has recently launched the Youtube Clip feature for all devices including Android and iOS. This new feature called Youtube clip lets users crop and share 60 seconds of video clip using the share button on the app intself. User can directly cut 60 seconds of video clip from any existing youtube video directly on the app and share it across all the platform using the in-app share feature.

Followed by the popular game streaming app Twitch, Youtube has recently launched the clip and share feature to the official Youtube app across all devices including android and iOS. This new feature is called Youtube Clip.

The feature lets the user crop or cut a specific 60 seconds video clip of any video on the app and share it across all social media platforms using the standard in-app share button.

Users can see an additional button called “clip” just after the dislike button under the video. Tapping the button allows the users to clip a specific 60 seconds video clip from the video and share it using the built-in share button.

Step 1: Find the video you want to clip

The feature is limited to few videos for now. If you are lucky enough you may find a tiny “clip” text followed by pair of scissors icon just beneath your favorite video. Just play the video and tap on the clip icon.

Step 2: Select the Clip on the video 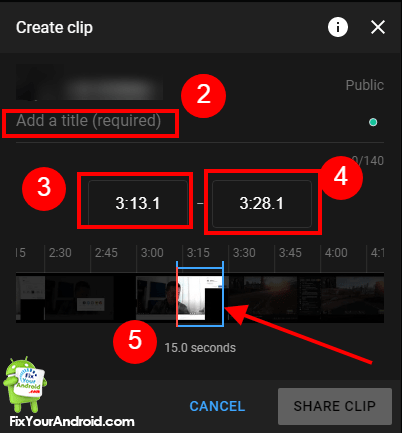 Now select the video clip either by seeking the progress bar below the video clipping tool or enter the starting and end of the video duration. remember the duration of the clipped video should not exceed 60 seconds.

The feature is however limited to desktop and beta versions of the Youtube app on all platforms including Andriod and iOS. Youtube has officially confirmed that the shared clip will be eligible for monetization if the length of the video is more than 30 seconds.