Android MAC Spoofing Why and How?

MAC address or Media Access Control Address is a unique identification code of every smart device that needs or uses the internet. Each device has a unique MAC address that is used to identify the device on the internet.

On Android phones, Mac addresses identify your devices on a network so that servers, apps, and the internet know where to send packets of data, and some also use it to track your device’s activity.

Read Here: How To Find MAC Address on Android Mobile And Tablet 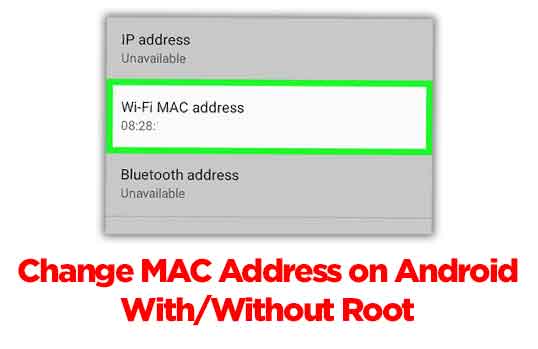 Why Do We Need to Change MAC Address?

Changing Android MAC Addresses can bypass access control lists on routers or servers to hide it from other networked devices and users. Or it can also be used to spoof and show like other devices on the network.

Another term for this transition is Mac spoofing, which is done for legitimate and illicit purposes alike.

Moreover, there are some security befits of changing MAC address on android and that is it adds an extra security layer to your android security. As it can make it hard for hackers to identify your Android on the network.

Especially when the android is connected to public or open wifi like schools, Public Wifi or Workspaces, the chances of a hacking attack increases drastically.

In such, Spoofing Android Mac address prevents direct hacking because the impersonator cannot access your device directly without the actual address. Just think of this situation as using someone’s social security number.

It also helps you to connect to a network where your Android MAC address is blocked or blacklisted.

MAC address spoofing is possible on android with root and without root access as well. But, the process and tools required to change android MAC address under both conditions are quite different.

We are using a Samsung Galaxy phone as an example. However, Android MAC spoofing on all android phones is quite similar.

Here is the method to change MAC address on Android with root and without root access.

Most of us, are not so handy with technology and often avoid root Android for warranty or other security reasons. In such, this method will assist you to change Android MAC address without root access. Follow the steps below;

Step 1. Get the Current MAC Address

Note down this number as you may need it to change it back to the original.

This will remain the default MAC address on android until the device is booted or restarted(non-root android).

Sometimes you might get the Access Denied error while changing MAC address on the non-rooted android. In such you need to enable ADB Wifi from within the Settings of your phone.

This process however, comes in handy for both non-root and root android to change MAC address temporarily.

To change MAC address on Android with permanent effect a rooted device is required. The MAC spoofing on the non-root devices is temporary and gets restored to the original once the device is restarted. So, before you proceed, make sure to Root Android using the unlock tool and firmware.

Download and install BusyBox and Terminal Emulator for Android from Google Play.

This will change the MAC address to new MAC address in android with permanent effect. Take note that the change is permanent, even after you restart your Android phone.

Read Also: How to Fix a Hacked Android Phone? Diagnose and Troubleshoot

These were the methods to change MAC address on Android with and without root access to spoof the name. For those who are still confused, here is a quick FAQ to MAC Address.

Is Changing MAC Address on Android is legal?

Yes, changing MAC address on Android is completely legal and doesn’t violate any rules or regulations.

Can I Change My Android MAC Address?

MAC Address vs IP Address What is the Difference?

The IP address of a device mainly helps in identifying the connection of a network (using which the device is connecting to the network).

The MAC Address, on the other hand, ensures the computer device’s physical location. It helps us to identify a given device on the available network uniquely.

The process of changing MAC address on android is called MAC spoofing. The technique is used to change the MAC address of Android on the rooted and non-rooted device are quite identical including Android version 10 and later, but with the different advantages of permanent and temporary changes of MAC address. MAC spoofing is legal and can be achieved easily by following the guide above. The method helps you to hide your android device identity on connected network to save it from potential hacking attacks and other reasons. Don’t forget to check our HOW TO section for other useful guides for Android.