You might have encountered the parsing error on android while installing the apps on Android. Whenever you attempt to download and install an app from Play store a pop-up error “There was a problem parsing the package” is propagated and keeps you from installing the app. 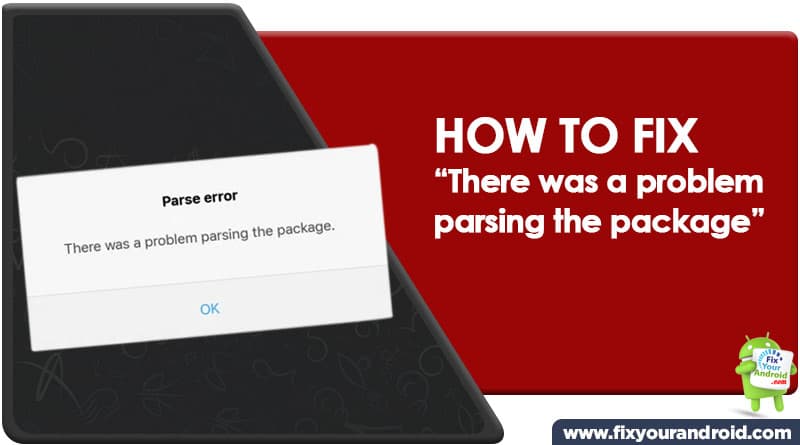 No, matter what version of Android you’re using or what model and make of the Android phone you are using the parsing error might come up every now and then. But, how to fix “There was a problem parsing the package” on Android and install the apps on Android” Let’s find the solution.

Whats causes the “There was a problem parsing the package” Error

Before we head to the solution, it is suggested to spare some time to understand the error and the causes behind the parse error on Android. However, there are series of problems that can cause Andriod to show a parse error pop-up, but here are the main reasons for Android to display the parse error.

1. App Not suitable With Current version of Android OS

One of the primary reasons to encounter the parsing error on Android might be related to version conflict between the APK files and the current version of Android OS on the device.

To solve the error it is recommended to update the Android OS to the latest version and try reinstalling the app.

Corrupt or incomplete downloaded APK packages might also be the reason for your android to display the  “There was a problem parsing the package” error pop-up while installing the app.

Make sure to download the complete APK file before you attempt to install it. Also, make sure that the APK you are installing is not corrupt.

In order to secure the data and privacy, the Android system imposes some security measures and that can also cause the parsing error while installing the app on Android.

As the Android system is designed to allow the app installation from a trusted source like Playstore.

An attempt to install an app from a third-party source or directly by APK may alert the Andriod security system and this blocks the essential package files and hence showing the parsing error.

Methods To Solve There was a Problem Parsing the Package Problem

There are series of solutions you need to apply in order to solve the parse error and stop android from showing the “There was a problem parsing the package” pop-up while installing the apps. Here are all the methods listed you can try.

you might encounter the parsing error when you install the app using an APK file that is download from outside the play store.

In order to fix the parsing error, all you need is to enable “Unknown Source” to allow the installation of apps from unknown sources under developer options on Android.

Sometimes a corrupt APK file can also return you the parse error while installing. APK app downloaded from third-party source is sometimes tend to contain malware as well. The best option is to try downloading the app from an official source like play store.

You can also see the download file size to confirm if the file is not incomplete or corrupted. Install the app on PC using an emulator like Bluestack to see if the apk file does not contain any error.

As we know by now that the apps built for newer versions of OS Android OS cannot run on older Andriod. SO, in order to solve the parsing error while installing an app on your android phone, you might need to update the OS.

This is an automatic task and can be easily performed by simply going to the setting>about>check for update section on your Android phone. This is how you check for your Android OS update.

You can also try installing a custom ROM to see if the problem is resolved.

Google Play Protect is a security measure for Android devices that helps the Android system to detect potentially harmful apps automatically. This measure can often end up detecting an app as malware especially the apk file installed from a third-party source.

In order to solve the parse error while installing the app, you need to disable the Google Play Protect.

To Disable Play Protect on Android

What does it mean there is a problem parsing the package?

The error means that the Android installer is not able to parse the installation file and process the APK package file to install on Android. This can be caused by a corrupt apk file, invalid APK package, Google Security measures, etc.

How do I fix there is a problem parsing the package?

You can use the methods explained above to solve the parsing error on Android. There is not a certain method to solve the error however, you can try each method one by one and see which one worked for you.