What is com.wssyncmldm? Is it a bloatware a malware or a spyware. What is the role of com.wssyncmldm on Samsung Android phone. Let’s find the answers.

The com.wssyncmldm is an update monitor app installed on Samsung Android phones to monitor and track the update status of the device OS.

It’s a pre-installed app or agent on the Samsung Galaxy phone to monitor the system status for a software update on Samsung Android.

The basic function of the app is to keep tracking the update status of Samsung Android OS and intimate the user using another pre-installed app com.android.backupconfirm. pop up

The Android OS uses this app to monitor the software status on Samsung Android and server to ensure the device is running the latest version of Android. 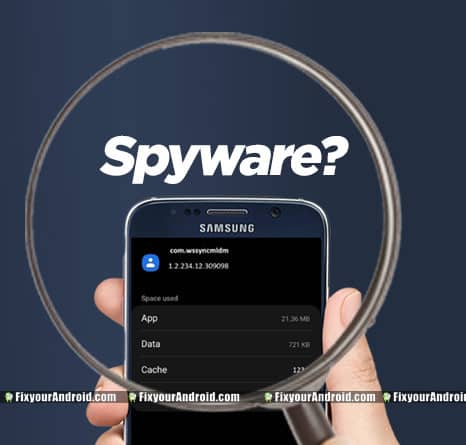 Is com.wssyncmldm a Spyware?

No, com.wssyncmldm is not spyware, it’s an app package also known as Bloatware running in the background continuously to keep an eye on OS update status.

People often misunderstand it as malware or spyware and keep looking for a method to disable com.wssyncmldm.

However, it is possible to remove com.wssyncmldm from the Samsung device by root access only. But as it is the tool to keep you intimating for the latest security patch and updates, it is suggested to let it run in the background.

Users have reported the com.wssyncmldm causing problems and errors on Samsung Android. This can be caused by app malfunction or cache issues.

If your Android keeps pop-ing up the message “The application Device management (process com.wssyncmldm) has stopped unexpectedly. Please try again”. You can use safe mode to clear the cache to fix the error. You can also follow the mentos below to fix the error.

The easier method to fix the com.wssyncmldm errors is to force restart your Android. A forced restart is quite different from a regular restart. It forces your device to close all the running apps and restart the device. Force restart the Android system also make sure to recreate the cached data of specific apps that can help you to solve the error. Here is how you force restart your phone;

Outdated apps on Android may also cause the device to com.wssyncmldm error. In order to fix the error make sure you are using the latest version of all the installed apps on your device.

In such you are required to update apps to latest version by which simply visiting Google Play Store and hit update.

Can I uninstall com.wssyncmldm?

What is COM Wssyncmldm used for?

Process com.wssyncmldm is a OS update monitor app on Samsung phones that keeps searching for the avaialable OS updates on SAmsung server itself.

What is Wssyncmldm on my activity?

What is InCallUI app used for?

InCallUI is a process that is responsible for providing a GUI screen to the user for handling the calls allowing the user to make calls, reject calls, receive calls and other call-related tasks. read more about InCallUI.

process com.wssyncmldm is a stock app package on Samsung Android device to monitor the OS update status on your device. The basic function of the app is to keep checking for the latest OS version on Android and inform the user of any available updates.

OTHER COM PROCESS ON ANDROID