IMSLogger is a pre-installed app on Samsung android phones accountable to handle the messaging sync services on Samsung phones. Know more about IMSLogger. Permissions IMSLogger has and how to troubleshoot common errors.

Samsung phones are well known for installing several system apps and bloatware, some of the apps are useful while others are useless. IMSLogger is one of these system apps installed on your Samsung Android phone.

What is IMSLogger on Samsung Android?

If you own a Samsung Android phone then you might be familiar with the IMSLogger.

IMSLogger is a pre-installed system app on your Samsung that helps the SMS apps to sync the messages on the device. The app is also known as imslogger+ on modern Samsung phones.

Basically, this app gives you flexibility in terms of getting and sending multimedia messages (MMS) and also for database and diagnostic for T-Mobile and VoLTE WiFi calling.

The messaging sync service works with a network vendor to carrier provider communication apps to deliver the calls and SMS via the IP networks. 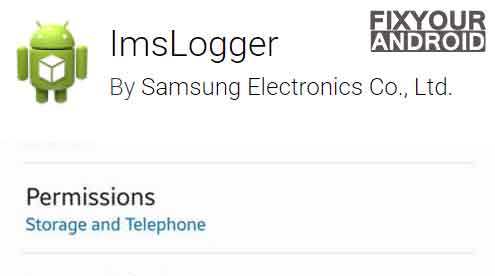 IMSLogger is a system app on Samsung phones that provides communication services like calls, SMS and MMS and keeps running in the background. The app has other additional permission which are as follows;

Unfortunately, It is not possible to uninstall the IMSLogger from Samsung device. And you don’t really need to remove it as it is one of the essential system app. An attempt to remove IMSLogger may cause your device to malfunction.

How to Fix Unfortunately IMSLogger has stopped Error?

“unfortunately IMSLogger has stopped” is one of the prevalent errors you might have come across. This might be caused by several errors.

The simple method to fix the error is to clear the catch and data of the app. You can simply navigate to apps>show system apps> IMSLogger> clear cache. You can also try to update the app using a IMSLogger APK file.

All the system apps on Samsung including the IMSLogger itself tends to run in the background and tends to use the power. IF you are really concerned, you might need to kill the app and restrict it from running in the background.

Follow the steps to restrict IMSLogger from running in the background; Navigate to Apps>sytsem apps>IMSLogger

There are several other system apps you can uninstall safely to boost battery life(List of Bloatware safe to remove).

What is IMS Services?

IMSLogger or IMSLogger+ is a pre-installed app on Samsung phones provided by Samsung itself that is accountable to provide the SMS sync services via network carrier providers. The app is completely safe and keeps running in the background. You can’t uninstall it but if you are really concerned about the power draining issues. You can always force stop the app and restrict it from running and the background and using mobile data.