DiagMonAgent is a diagnosis monitor tool for the Samsung Andriod device. But what is the functionality of the Diagnostic Monitoring Agent on Android? And how to fix the “DiagMonAgent has stopped error on Samsung”. Let’s find out the answers.

DiagMonAgent stands for Diagnostic Monitoring Agent that helps Android system to diagnose the device for wifi connectivity, and other services for potential errors. Samsung is well known for installing the DiagMonAgent as a system app on their smartphones. 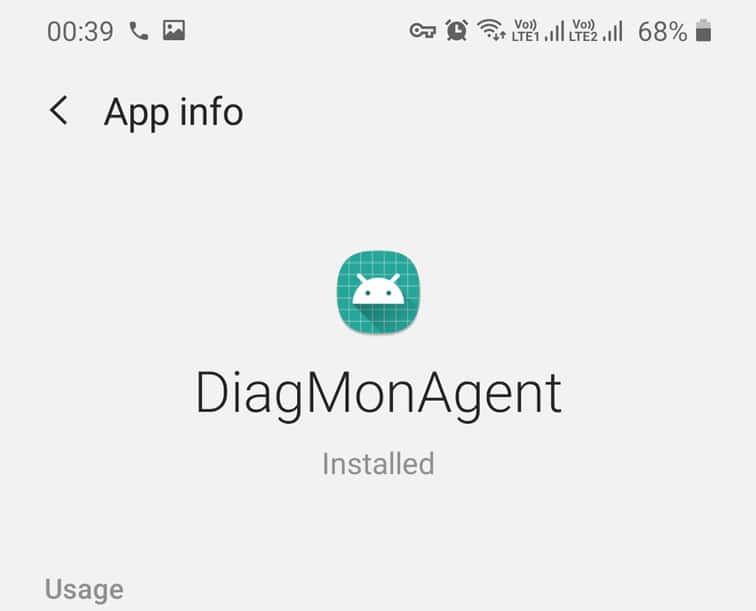 While others have reported that the pop-up error will show up every now and then while playing games. And the list goes on. Here is the list of some basic reasons for the DiagMonAgent error.

What Causes DiagMonAgent has Stopped Error?

Here are the basic reasons that cause your Android to show ‘DiagMonAgent has Stopped Error’ pop-up.

If you are lucky enough, you will never get to see the pop-up “DiagMonAgent has stopped”. But still, there are some series of troubleshoots you can use to fix the DiagMonAgent error on your Android.

This is the basic and first most step you should take to resolve the DiagMonAgent error on Android. All you need is to switch off your Android and wait for 30 seconds. Switch it back and see if the problem is gone.

Cache memory on Android is temporary storage created by the apps running on Android(Read more: Cached Data | What is Cache Data and How to Clear Cache on Android). A corrupt cache data can also intervene in the normal function of the DiagMonAgent app. So, it is suggested to clear the cache partition on Andoid to resolve the DiagMonAgent has stopped error on Android.

To Clean the cache:

The DiagMonAgent app is, however, a system app but fortunately, it is possible to disable the app completely from Android. Disabling the DiagMonAgent will not affect the normal functionality of your Android and you can always enable it back when required.

How to Run Diagnostics Tests

We have now learned about the functions and usages of DiagMonAgent diagnostics tool. Now here we shall learn to use the codes to access and run the Diagnostics test on an Android phone.

There are two methods to run the Diagnostics test on your android. You can either dial *#0*# on your default dialer app to access the hidden diagnostics menu. You can also use the code *#*#4636#*#* to access the usage information menu and run all the diagnoses like sensor check, display test, touch responses, accelerometer, etc.

No, DiagMonAgent is not a virus. It’s a system app on Samsung Android phones used to diagnose the functins and features on an Android smartphone.

Is DiagMonAgent spying on me?

No, DiagMonAgent is not a spyware app that keeps sneeking all you activity and logs on Android. The App is completey safe and can be trusted.

What is a Bloatware?

Bloatware on Android device is some system supporting apps that help the system to run some important tasks. ChocoEukor, CoolEukor, RoseEukor are the example of Bloatware on Samsung.

DiagMonAgent or Diagnostic Monitoring Agent is a system app on Samsung Android phones to diagnose the function and features of the mobile phones. Users can also access the diagnosis menu with the key compilation *#0*#. However, users have reported a constant pop-up error “DiagMonAgent has stopped” while playing games or during normal usage of the Samsung smartphones. Don’t forget to check our ABOUT section for other information guides for Android.