What is ConfigAPK on Android? Is ConfigAPK secure and how to remove ConfigAPK by disabling ConfigAPKpackage on Android. These are the question we are going to find the answers for. IF you are also concerned about the term “ConfigAPK” on Android. Then follow the post.

What is ConfigAPK on Android?

APK is an application package used to install apps on Android devices. Whereas the ConfigAPK is accountable for the execution of APK bundle for Successful installation of the application on Android phones.

Also, the ConfigAPK is responsible for the installation/uninstallation task on your Android automatically.

It’s a system app that doesn’t require any special permission to run on Android. The app is executed automatically every time the user attempts to install or uninstall an app on Android.

The file is related to the automatic installation or uninstallation procedure of the initial setup procedure when the device is first purchased and is only 20KB large, which means that it merely takes any space.

However, many Android users raised concerns about Config APK, claiming that the app slows down the phone and drains its battery rather quickly.

Read Also: How to fix “There was a problem parsing the package”?

Android app bundle is a set of instructions that stores all the important information required for installing or uninstalling an app on Andriod. It’s a transfer configuration protocol on the Google Play store.

ConfigAPK is a system app used by Android 5.0 (Lollipop) and later versions. Its main responsibility is to handle automatic app installation during the initial device setup.

The ConfigAPK app can be seen in the list of running background apps but there’s nothing to worry about.

What Permission does ConfigAPK Have on Android?

ConfigAPK doesn’t require any specific permission to run on the device. However, it may have Phone permission in order to keep running. You can still, view the access permission ConfigAPK have on your android following the steps;

No, ConfigAPK is not a virus. However, users have reported and associated it with a virus and malware which is not true. ConfigAPK is an application bundle on Android mobiles with a size of 20kb. the app is responsible for installing essential apps when a new android phone is started the very first time.

ConfigAPK is however, safe and secure and it’s completely ok to let it run on your Android. But still, users have reported some errors allegedly cause by it. Here are a few of them.

Users have reported that the app is causing the Android mobile battery to drain fast. However, there is no evidence or authorized sources to confirm the battery draining due to configAPK package.

ConfigAPK keeps running in the background

There are several system app packages you can find running in the background. Some of them are essential and others are ok to disable. It is safe to disable ConfigAPK without affecting the normal operation of android.

All the apps including ConfigAPK packages tend to crash over time if there is some cache conflict or corrupt file installation. You can navigate app>ConfigAPK>Storage and select ‘Clear cache’ to fix the error.

AS we discussed above the ConfigAPK package is completely safe and it’s ok to let it run in the background without worrying about battery draining and device data security. Still, you can disable the package. Follow the steps below to disable ConfigAPK. 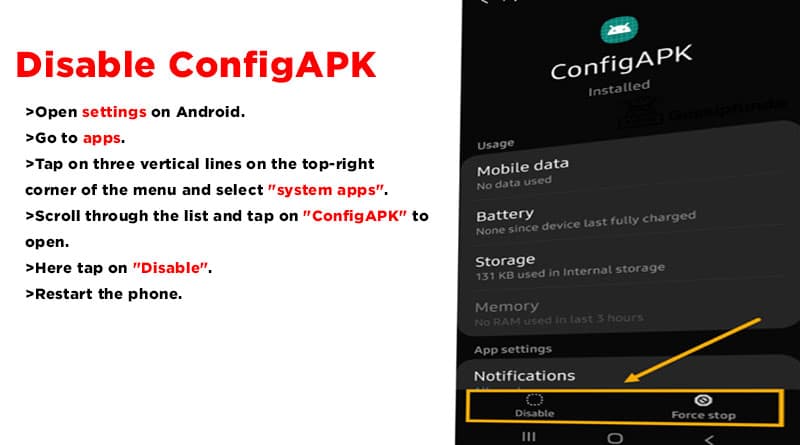 As we discussed earlier, it is not suggested to uninstall or remove ConfigAPK from the device. Still, it can be installed using the methods explained here.

No, there is no authorized evidence of ConfigAPK draining the battery on android. The app package however, keep running in the background but it stays idle and only initiated when an installation or uninstalling of an app on Android is performed.

ConfigAPK is an app package on Android phones accountable for the installation and uninstallation of an app on a device. This 20 kb-sized file keeps running in background and users have reported that the app keeps draining the battery of their phone. However, there is no evidence of so. Also, it’s not a virus and it’s completely safe to let it run in background on your Android. Don’t forget to check our ABOUT section for other information guides for Android.