As the name suggests itself the “com.Samsung.android.incallui” is a graphical user interface you see on your Samsung Android phone while making calls, receiving calls, or opening call logs. 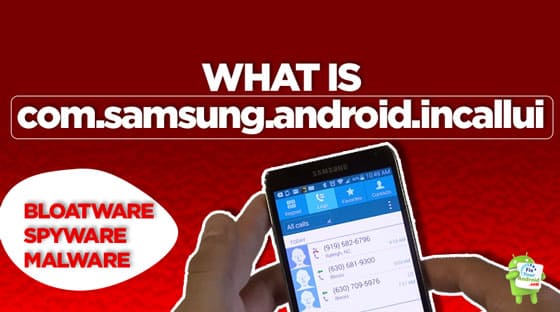 All the app installed on Android are assigned a unique package name that helps the developers and android system to distinguish one app from another.

com.android.incallui is the package name for the default call user interface on android phones. This user interface is displayed on the screen to assist users to dial calls, receive calls, record calls, merging calls, put the call on hold and performing other call related tasks.

What is the purpose of InCallUI?

The InCallUI or in-call user interface is a screen you use to control the incoming calls, outgoing calls, including call logs, call recording and other calls-related tasks.

Is InCallUI used for cheating?

There is no other feature on InCallUI that can be used for cheating, spamming, or spying. However, all the latest Android InCallUI comes with a built-in call recorder(including com.Samsung.android.incallui on Samsung Android phones) which might be a big concern.

No, com.android.incallui is not a virus. It is used to provide a GUI for users to perform call-related tasks including making calls, receiving calls, connecting/disconnecting calls etc.

No, it is not possible to disable the com.samsung.android.incallui. However, you can always use some other dialer app to replace the default dialer app on your Android.

The application simply helps users to perform call-related tasks and hypothetically removing it will disable the in-call GUI on Android devices which will make it impossible to make or receive the calls.

Although you can still remove or uninstall the com.samsung.android.incallui using ADB command on a rooted android phone.

Read Also: How to Block Caller ID on Android and call from Private Number

Is It Safe to Uninstall com.samsung.android.incallui?

The com.samsung.android.incallui is an essential service on your Samsung android to make, receive and handle calls. In absence of This In call Interface, it would not be possible to perform these tasks.

Apparently, it is not a good idea to attempt to remove or uninstall com.samsung.android.incallui from the device. This can make the device useless and make irreversible damage to the device.

Like other system apps on android it is quite common the get unfortunately, com.samsung.android.incallui has stopped error. A simple restart can solve the error. But, if the problem persists and the InCallUI crashes frequently then you follow the methods below to fix it;

Force restart of the Android system also makes sure to recreate the cached data of specific apps that can help you to solve the IncallUI error.

once the android is turned on try opening the app and see if the error is gone.

A corrupt cache can also cause an anomaly with the app package of IncallUI. In such clearing, the cache of the app can also resolve the com.samsung.android.incallui.

Sometimes outdated apps on Samsung can also interfere with the normal operation of IncallUI and hence it may keep stopping while accessing some apps on the device.

Make sure to keep apps on Android up to date to fix the com.samsung.android.incallui has stopped error.

Follow the steps below to update the apps to the latest version;

Updating the apps to the latest version on Android not only helps to resolve app errors but also helps to protect your device from potential hacking attacks.

What Is a User Interface?

As the name suggests itself System User Interface or User Interface is the front end of a app or software that is displayed to the user to help the interact and use different features on Android.

It is one of the essential Android services that lets users reach and interact with the device in a nice graphic visual interface. The service is installed under the Package name com.android.systemui.

A user interface (UI) is one of the aspects of an app that you see. As long as it shows on your Android smartphone screen and you can interact with it, it’s a user interface!

The com.android.systemui and Samsung Android IncallUI may seem different but they work together to help users to place and handled the calls.

Samsung Android InCallUI is the screen that is displayed once you press the dial button on the dialer app on Samsung android phone.

com.Samsung.android.incallui is a call-related user interface screen you see on Samsung Android phones. This Incall UI is used to access and perform various call-related tasks including making and receiving calls, etc. This is an essential tool for android phones and is not to be considered spyware or malware. Don’t forget to check our ABOUT section for other information guides for Android.