CIDManager is a pre-installed system app on Samsung android devices used to show the notification about the network update from the operator. Know more about CIDManager. What is it? What is CIDManager used for? Is it safe? How to uninstall CIDManager from your Samsung android phone. Let’s dig the answers.

What is a CIDManager?

Samsung Android users might have experienced a notification on their phone called New Service Provider notification. This notification is actually triggered by using the CIDManager app on your device.

CIDManager or Carrier Identification Manager is a factory-installed app on Samsung android device accountable to update the CSC(Country Specific Code). The app ensures that the device have the access to country-specific Firmware updates by identifying the carrier network(service provider)

CIDMonoter keeps running in the background on the device and keeps an eye on the service provider changes like downtime, changes and others. The app triggers a notification on the device when any change is detected on the status of the carries provider.

There are several other system apps on Samsung devices like App Stacks used by carries providers themselves for purposes like surveillance, ad display UICC locking and others.

All the apps installed on android have their unique package name that helps the developers to identify the app. This also helps the android kernel to distinguish one app from others.

com.android.cidmanager is the package name for CIDManager app installed on Samsung android phones. The app is a notification manager app used to verify the valid CSC code.

The prefix “com” in com.android.cidmanager signifies the word “compilation” “android” means the android and “cidmanager” signifies the app itself. You can find a few other packages names which are as follows;

How Does The CIDManager Work?

The CIDManager app works as a bridge between the carrier network and ODM country to detect and access the country-specific firmware updates.

Every Samsung Android has a county-specific code that is used by the server to release the update for the device on a specific location. These unique CSC codes are linked to the carrier provider and ODM country code to release the firmware update.

The basic function of the CIDManager app is to help android to identify the CSC and ODM of the device associated with service provider.

Now, if the ODM country and carrier network doesn’t match then CIDManager will detect this and then provide a new configuration to tether the Original Design Manufacturing(ODM) country with the Radio Interface Layer(RIL) of the device.

This will allow the device to download global Firmware updates.

What Permissions Does CIDManager Require?

CIDManager doesn’t require any specific permission to run and operate on the device. Unlike other system apps on android, the app has phone access permission.

By enabling access to the phone, CID Manager can fetch every single piece of information about the phone that it needs to function.

How Can I Know If My Device Has The CID Manager App?

Every android phone has a dedicated carrier management app pre-installed on the device that links their carrier networks to the country of origin. Similarly, CID Manager is the pre-installed app to manage and link carrier providers and CSC on Samsung android phones.

To verify if a Samsung phone have it installed, you can simply follow the steps;

You can also check the phone’s Activity log and locate the app running in the background.

What is cmhprovider? Virus or Malware?

Is The CIDManager A Safe Android app?

Android users are always concerned about the safety and security of data stored on the device. This makes us wonder if the CID Manager App is safe?

So, CID Manager App is completely safe and doesn’t contain any virus, malware, spyware or keylogger. Also, there is no evidence of the app is sending your data to distant servers like Peel remote and others.

How to know If my Android is Hacked?
What is a Hidden Keylogger on Android?

Are There Any Disadvantages of Having The App On Your Device?

CIDManager on Samsung is one of the critical and essential system apps on the device. As the app plays an important role in firmware updates on the device. Still, like several other apps on android, users have reported several issues caused by CID Manager like fast battery draining etc.

One of the major disadvantages of having CIDManager app on Samsung is the new carrier notification. A notification that keeps popping every now or then that is quite annoying.

What is CIDManager Notification?

The CIDManager app on Samsung sends a notification on the device everytime it detects a new network service provider or carrier service on the device it sends the network configuration message that usually contains the APN setting, Network configures and other details. 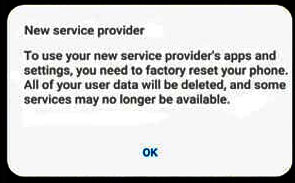 To use new service provider’s apps and settings, you need to factory reset you phone. All of your user data will be deleted, and some services may no longer be available.

sometimes CIDManager keeps sending the notification even when proper instruction is followed after changing the service provider. The pop-up message will keep flashing on the device every now and then and the device won’t respond until you open the message and save it.

sometimes the app keeps sending false service provider update messaging notifications which can be caused either by a bug on the app itself or in case of a corrupt SIM card where device keeps disconnecting the re-connecting to the network.

In such it makes it hard to use the device and it won’t let you operate the phone until you open the notification message and save it.

There are several factors that may cause the CIDManager to trigger a false or repetitive new provider notification. Fortunately, you can fix the issue using the methods explained below,

This is the easier method to get rid of constant CIDManger notification pop-ups. As this is a system app and like another system app, it is not possible to disable the motivation for CIDManger.

So, to stop the new carrier notification you can simply silent it next time when a new notification pops up. Here is how you do it.

This method is effective only when there is an active notification from CIDManger. Still, you can use another method to get rid of this service message notification.

Like another app on android CIDManager App also creates temporary cache data on the device that helps it to execute it fast. Sometimes an app crash or force restart of a device may cause the cache data to corrupt and hence to cause an anomaly in the actions.

Clearing the cache of CIDManager App can solve the new service provider network notification. This is how you do it; 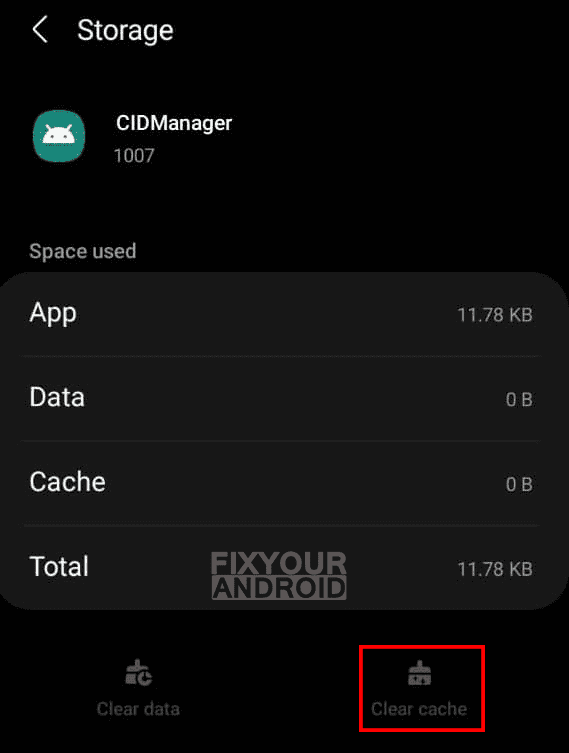 Restart the device to allow the app to create the new cache data and see if the problem is solved.

It has been identified that the new service provider notification from CIDManager is happening after updating to the latest version. On some phones, it only got available after updating software. 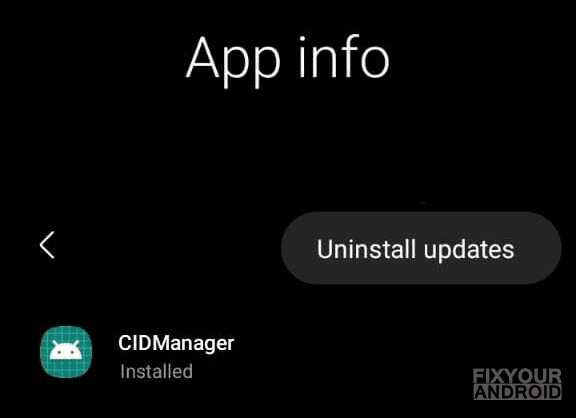 Restart the device to see if the notification is gone.

CIDManager is a critical system app, disabling it can cause further internal issues on your Android. Also, it is not recommended to disable it. But if the problem it causing is more serious to you then you can take a chance and disable it the safe way.

This will disable the app and hence end up solving the new service provider notification pop-up on your Samsung.

Alternatively, you can also uninstall the app.

Can You Uninstall CIDManager?

CIDManager however, is an essential app for your Samsung android phone but thankfully it is not the official part of stock ROM. Most users have got it installed via OTA update. It is not recommended to uninstall any system app from the device.

It is safe to remove or uninstall the CIDManager from the device. Removing it may cause some issues related to carrier provider notifications but it won’t affect the normal behavior and operation of the device.

Uninstalling the app doesn’t affect the performance of the device and we haven’t detected any issues while downloading Firmware updates. We also receive regular OTA Firmware updates from Samsung without any problems.

How to Uninstall CIDManager?

CIDManager is a pre-installed system app on Samsung android phones that works as a bridge between carrier provider and CSC codes. The linking is required for manual OTA updates by changing the CSC code on Samsung. The app is identified as a package name com.android.cidmanager and can be identified running in the background.

The app is one of the essential apps for your Samsung phone and users might encounter a constant notification on the device called “New carrier service” pop-up.

As per, the safety of the device, CIDManager is developed by Samsung itself and it is completely safe for the device security and data. Still, it is easy to remove or uninstall it easily and removing CIDManager from the device doesn’t affect the normal operation of your Samsung android phone.

Don’t forget to check our ABOUT section for other information guides for Android.